La Cumbia is a cultural and artistic, one of the most important and famous dances shown and enjoyed in the Carnaval of Barranquilla. In Colombia it started and originated in the Costa Caribe or more specifically in Cartagena de Indias while miscegenation happened between during the conquest and colonization

Woman where a long and wide skirt typically red or white composed of small squares and they gently move it and the hips, with the rhythm of drums and flute in the background, seducing the man while he lies coiled. The woman that dance the Cumbia always dance with a candle on their hand later passed to the men during the performance.

Men are all dressed in white and where a hat called "El sombrero Vueltiao", they always have a red scarf and also a backpack better called a "Mochila". This is danced in couples they do kind of a ring-rotating counter clockwise and men glide while woman overseas.
The rhythm contains three different cultural aspects: indigenous, black, white; this is why the music and sounds are composed of different instruments like african drums that are cheerful and caller. Also instruments such as maracas, whistles (flute) of Indigenous origin and the songs poetic contribution from the spanish that are sung by soloists and choirs in the cumbia most likely called "Millos". 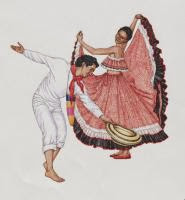 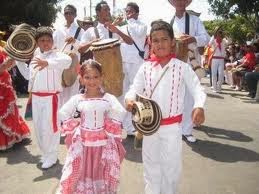