"The Monocuco " is the name given to this character and costume you can see below. The monocucos make part of Barranquilla's carnival and it originated when individuals who didn't want to show their face and hided their identity. What people say and how the story goes is that there was a time in Barranquilla where rich men where very attracted by the women with low resources. So "the monocuco" was created to conquer the woman without their identity during carnaval and keep sheltered from the gossip, which Barranquilleros are most known for to be "chismosos". 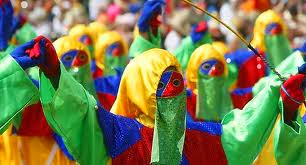 This costume consist of a large colored robe with a hood to cover the face, this robe are all different and their unique style. It also consist of a mask that cover the rest of the face with a piece of cloth.

It is still not known its origin but what most can tell its from the carnaval traditional villages such as Rioacha, before the twentieth century. Now present the monocuco is still a present costume with its unique colors and features for example the mask to hide themselves.

The monocuco is considered to be fun and make fun of the rest. Today there is more than fifteen thousand monocucos in parades such as the Batalla De Flores (Battle of the flowers) showing its color and the joy to party they carry.